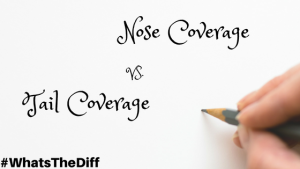 Now we’re taking some time to clarify the difference between Nose & Tail coverage.

Malpractice policies are written on either an Occurrence or Claims-Made basis. When working with the latter, physicians have exposure to future claims from incidents that have already taken place in the past. This is why it is important to seek “Nose” or “Tail” coverage depending upon the nature of your policy change.

What is Nose Coverage?

Nose coverage involves getting your new insurance carrier to essentially “pick up” your prior acts. This happens
when coverage is provided for a claim that arises from a medical procedure performed while under a
previously terminated policy but first reported under your current policy.

What is Tail Coverage?

When closing out of your old policy, tail coverage will continue to cover claims made until you have your
new policy setup. A “tail” extends professional liability coverage for incidents that occurred while a
claims-made policy was in effect but was not filed as a claim until after the policy was canceled.

When it comes to Nose coverage, getting a new insurer within the same state to pick up your prior acts
is usually easy; however, doing this across state lines can be a challenge. Nose coverage is also usually
the more cost-effective option between the two.

In the event, you’re joining a group and there may be a point of negotiation between picking up your prior acts (nose) or covering your tail coverage.

If you need help with discussing coverage options with your new employer, give us a call directly at 805-499-7300 or email us at info@presidioinsurance.com we’re happy to help!

Do you need help deciding whether to go with nose or tail coverage? Get a quote today!