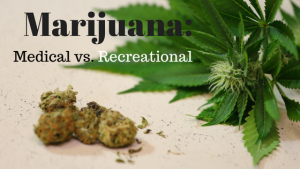 Although Medical Marijuana is recognized in both a clinical and alternative medicine respect, it has been the crux of political
and social discourse. In recent years, the legalization of marijuana has spread across The United States like wildfire and it seems that it’s only a matter of time before the entire country legalizes its use.

When comparing the number of states that have legalized recreational vs. medical marijuana, you may wonder why there’s such a disparity between the two. Let’s examine the differences, to get to the bottom of it.

Medical Marijuana is any form of cannabis that generally has a higher percentage of Cannabidiol or CBD, which is
known for the physical benefits it provides medical patients. Those that use it experience relief from pain, anxiety,
insomnia, glaucoma, seizures, etc. However, a medical marijuana card or license can only be acquired through a licensed
physician. As mentioned in our “Can I Prescribe Medical Marijuana?” blog, physicians can’t prescribe but will recommend medical
marijuana if they believe a patient will benefit from it.

Recreational Marijuana is any form of cannabis that can be legally purchased by adults aged 21 and over. Only nine states currently allow the use of recreational marijuana. Unlike medical marijuana, recreational cannabis does not need to be prescribed. The state of Colorado allows for people to have one ounce on their person. Having more than this legal limit can possibly result in fines and or legal charges. Although it has been found that recreational weed can also have medicinal properties, it is generally sought after more because of its high THC percentage. Tetrahydrocannabinol (THC) is known for its psychoactive properties and people enjoy greater amounts of THC because of the “high” that is often associated with it. Recreational Marijuana does have some medical benefits, however, most people who are suffering and trying to gain relief, tend to stay away from the “high”.

The taxes gathered from the sale of Marijuana goes towards education. $40 million went to a program called BEST which uses the funds to award grants allowing schools to build and improve facilities specifically in rural districts. Judging by the economic impact and the immense economic growth in Colorado, we look forward to other states joining in on legalizing marijuana.

Want more information on Medical Marijuana’s impact on your practice? Give us a call directly at (800)317-6411 or email us at info@presidioinsurance.com.

1 thought on “Marijuana: Medical vs. Recreational”